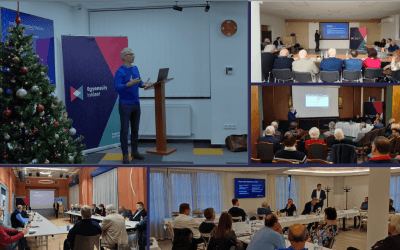 A new project with CIPE

We launched a new project in November with the Washington based Center for International Private Enterprise (CIPE) to discuss how we can strengthen the economic growth in Hungary with stakeholders in rural Hungary.

In order to dynamize the economy, we not only want to present our policy proposals but we also want to collect impulses from the field, to improve our policy recommendations for the future. We have visited seven cities in Hungary so far –  Edelény, Szentes, Szombathely, Győr, Tatabánya and Székesfehérvár and Jászberény – where we exchanged views with mayors, local representatives, and leaders of small and medium-sized enterprises, and observed the economic operations, shortcomings and local solutions from below. In total, we will visit ten rural cities in Hungary, and consult more than 200 local businessmen, and at the end of the project, in February 2022, we will deliver our updated economic policy proposal in Budapest.

Certain obstacles to economic growth are regularly mentioned in all the cities we have visited so far, which leads us to the conclusion that there are some policy issues that are not only present on the local level, but rather on the national level. This realization helps us to develop a more comprehensive bottom-up policy proposal, aiming to boost economic improvement in the country.

One of the difficulties entrepreneurs regularly face in rural Hungary is unskilled labour or simply the shortage of labour. The problem is that the available workforce is often functionally illiterate, unable to navigate in a highly digitalized environment or speak foreign languages, which are inescapable parts of economic improvement. Another issue is that even skilled workers do not have the necessary practical experience often needed for a specific job. Moreover, local stakeholders find that a majority of people open to work are only willing to work part-time instead of full-time, which makes multinational companies more attractive to them instead of local businesses. An example of this was reported by a local business involved in the production of furnaces. According to the management team, the limited number of available workforce prevents their enterprise to double their production.

On the topic of international expansion, most enterprises find that the barriers to cross-border growth are hard to overcome. The lack of workforce and capital are all obstacles preventing companies from enlarging, while the possible burden of different legal environments also blocks businesses in rural areas from seriously contemplating international expansion.

In many places, the failure and excessive bureaucracy of public and EU subsidies were also highlighted.  Several entrepreneurs pointed out that these funds are not linked to efficiency and therefore distort competition.

Most businesses have agreed that achieving a quasi cashless society (reducing the cash payment to ⅓ of all transactions) is feasible by 2030. The vast majority of entrepreneurs reported that switching to digitalized bank transfers for salary payments was a relatively easy process, and the further reduction of cash in the economy seems like an achievable goal.

The question of the euro as a national currency was brought up as well as a possible instrument to boost the economy. There was a majority agreement on the need to introduce the euro as the official currency of Hungary, although the exact timing of the change is debatable around rural enterprises. A high number of entrepreneurs have stressed that the first step to achieving a stable shift from forint to the euro would only be possible by a fiscal balance in the country.

In our publication and in possible follow-up activities as well, we will focus on what entrepreneurs would suggest solving these above-mentioned problems and obstacles.[/et_pb_row]
[/et_pb_section]