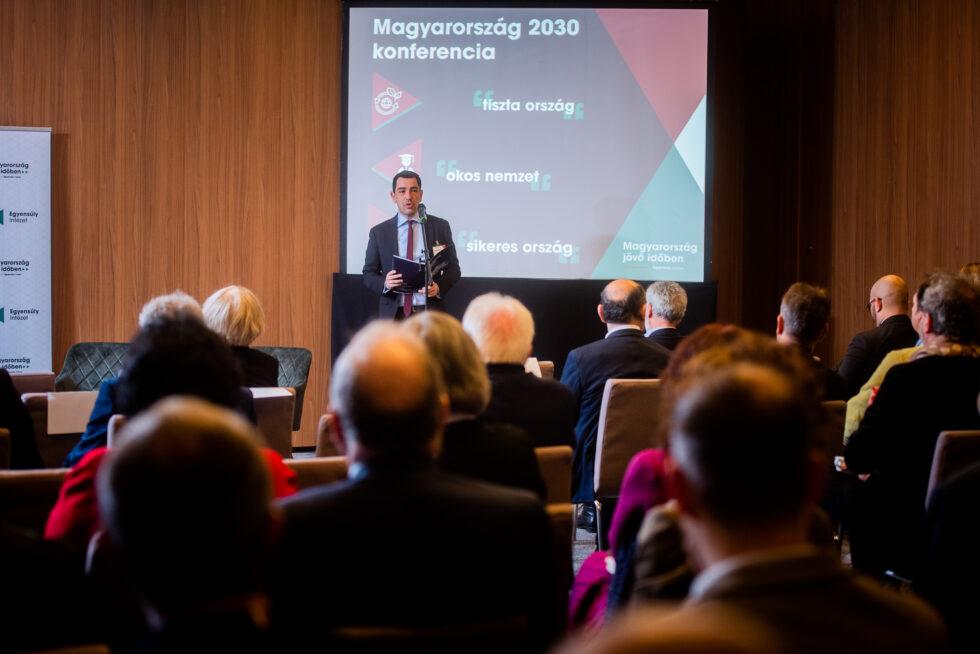 Nearly a hundred economic and political decision-makers met at the“Hungary 2030” conference of the Equilibrium Institute, on 8 March to discuss our policy proposals on education, the dynamization of the Hungarian economy and climate neutrality.

Equilibrium Institute brought together nearly a hundred economic decision-makers,opinion-formers and political stakeholders at the conference entitled “Hungary 2030” focused exclusively on how Hungary can be a successful, happy, and competitive country in a 10-year period.

Let Hungary be a clean country!

Hungary’s carbon dioxide emissions need to be decreased immediately stated István Bart in the introduction of his presentation on the Equilibrium Institute’s recommendations on how to reach climate neutrality.  The current goal which aims to reduce emissions by 0.6 per cent per year until 2030 is not viable in the long run, because to reach the 2050 climate targets, the reduction would have to be drastically and unrealistically increased to 4.7 per cent between 2030 and 2050. He added that in order for the goals of the domestic climate law to be met, an action plan would have to be developed, the fulfilment of the goals would have to be monitored by deadlines, and an independent climate council has to be set up along the lines of Western Europe.

The panel discussion following the presentation on climate protection, climate change and energy efficiency concluded: we need to end measuring natural capital in money. Irén Márta, Director of the Hungarian Business Council for Sustainable Development, pointed out that the Earth could support up to 10 billion people if we distributed our wealth wisely and reduced consumption. Invitees agreed that the public elements of emission reductions should be clearly promoted and the media should be actively involved.

Diána Ürge-Vorsatz, Vice-Chair of IPCC’s Working Group III and a Professor at the Department of Environmental Sciences and Policy at the Central European University (CEU) pointed out that we have the highest proportion of energy used for heating in the EU within the energy mix, which must be changed. According to her, the solution is not to increase energy prices, but to renovate buildings. Miss Ürge-Vorsatz stressed that the Intergovernmental Panel on Climate Change, of which she is a member, is now preparing its 6th report: there is growing scope for increasing deforestation and dangerous depletion of drinking water supplies. This poses an increasing threat to the countries of southern Europe, and Hungary must be prepared for the fact that by the second half of the century, maize production could fall by 70-80 per cent because there will not be enough water for irrigation. Turning to the Russo-Ukrainian war, she said now is perhaps the opportunity to reduce our dependence on natural gas.

The equalizer light is off

Well-trained, adaptable human resources have never been more important for a country’s competitiveness than now, as has been concluded from the Smart Country panel discussion. This is especially true for smaller states that are poor in natural resources. Gábor Filippov, research director of the Equilibrium Institute put it even more plastically: “Hungary could be really rich in one real resource, and that is human resources.” The solution sounds simple: in the education system, everyone should do what is her/his job and what she/he is capable of.” Regardless of ideological convictions and political affiliation, everyone agreed that Hungarian public education has acute, often crisis-related problems that need to be addressed immediately.

Education researcher Judit Lannert, an external expert of Equilibrium institute touched on the problem of teacher salaries, which are the lowest salary in the EU for novice teachers. Without reforms, good teachers will slowly run out not only of the institutions that teach the disadvantaged but also of the elite schools.

“The equalization lamp has gone out, segregation is tremendous, and education alone cannot solve this problem, because we are already teaching the second generation of segregated people.” – pointed out the founder of the Igazgyöngy Foundation, Nóra L. Ritók, who deals with multiple disadvantaged Roma children in the district of Berettyóújfalu. There is a burning shortage of teachers in lagging areas, and the problem can only be remedied temporarily by “travelling” teachers visiting small settlements.

Let the forint not be a toy of economic policy!

As stated in our policy package on economic dynamism, our economic catching-up has been one of the slowest in the EU, despite the economic boom of recent years. In the last decade and a half, the Hungarian economy has underperformed by about 30 per cent. Tamás Boros, director of the Equilibrium Institue, said “we do not talk much about being the second or third poorest country in the union. We can only solve a significant part of our problems if we have more money. ”

Hungary will only have a chance to move out of the trap of mediocrity if it can make efficient use of its existing resources and manage to approach the limits of its own real growth opportunities in the foreseeable future.

In the successful country panel discussion, there was a serious debate about the introduction of the euro in Hungary: investment adviser Viktor Zsiday, for example, considers whether the current volatility should lead to the introduction of the single currency within a few years.  László Urbán, a member of the Advisory Board of the think tank, emphasized that our money should not be a toy of economic policy, ie a government should not offset the consequences of its own measures with the value of the forint.

Viktor Zsiday would start the transformation of the domestic economy with a reallocation of 2 per cent of GDP, which would expand the education budget, and in addition, he would thoroughly speed up the domestic bankruptcy proceedings. László Urbán would change the channelling of money to be spent on economic development tenders, while Csaba Lantos, Chairman of the Board of MET Holding, would sign a new agreement with employers, introduce a social contribution tax by 2030, and launch a 20-year high-speed rail development program.

The conference adapted flexibly to foreign policy developments and also focused on the immediate and long-term effects of the Russia-Ukraine conflict. László Urbán was sure that the war would change the EU’s energy policy, that energy prices would rise sharply, and that would throw up inflation for many years to come. Viktor Zsiday confirmed this, adding that high inflation will hit the Hungarian economy harder than average. The dream of Ukraine being Europe’s pantry seems to be shattered. Csaba Lantos believed that if the fighting was over, it would be worthwhile for Hungarian decision-makers to think about moving agricultural production to Ukraine, and possibly investing in the previously very strong aluminium industry capacities. Turning to the transformation of European energy policy, he said that if Germany wanted to restart its nuclear power plants, it could take 1.5-2 years for the necessary fuel cells to be produced.

Equilibrium Institute continues to work on the preparation of policy proposals for the development of Hungary and on the maintenance of a regular and high-level dialogue between different domestic and international stakeholders.